Introduction to the Hamsa hand symbol

The Hamsa hand or hand of Fatima is one of the oldest symbols in the world. It predates any major religion or organized religion in general. This symbol is found in many cultures, because they were adopted to fit in their beliefs.

The common representation of Hamsa hand, is the symbol of safety and protection that many of the different religions use.

If you’ve visited the Middle East or North Africa, you’ve probably seen this symbol of protection, as it originated here somewhere. To keep negative energies away, and to praise God, they wear it as an accessory, on clothing, and even tattoos. 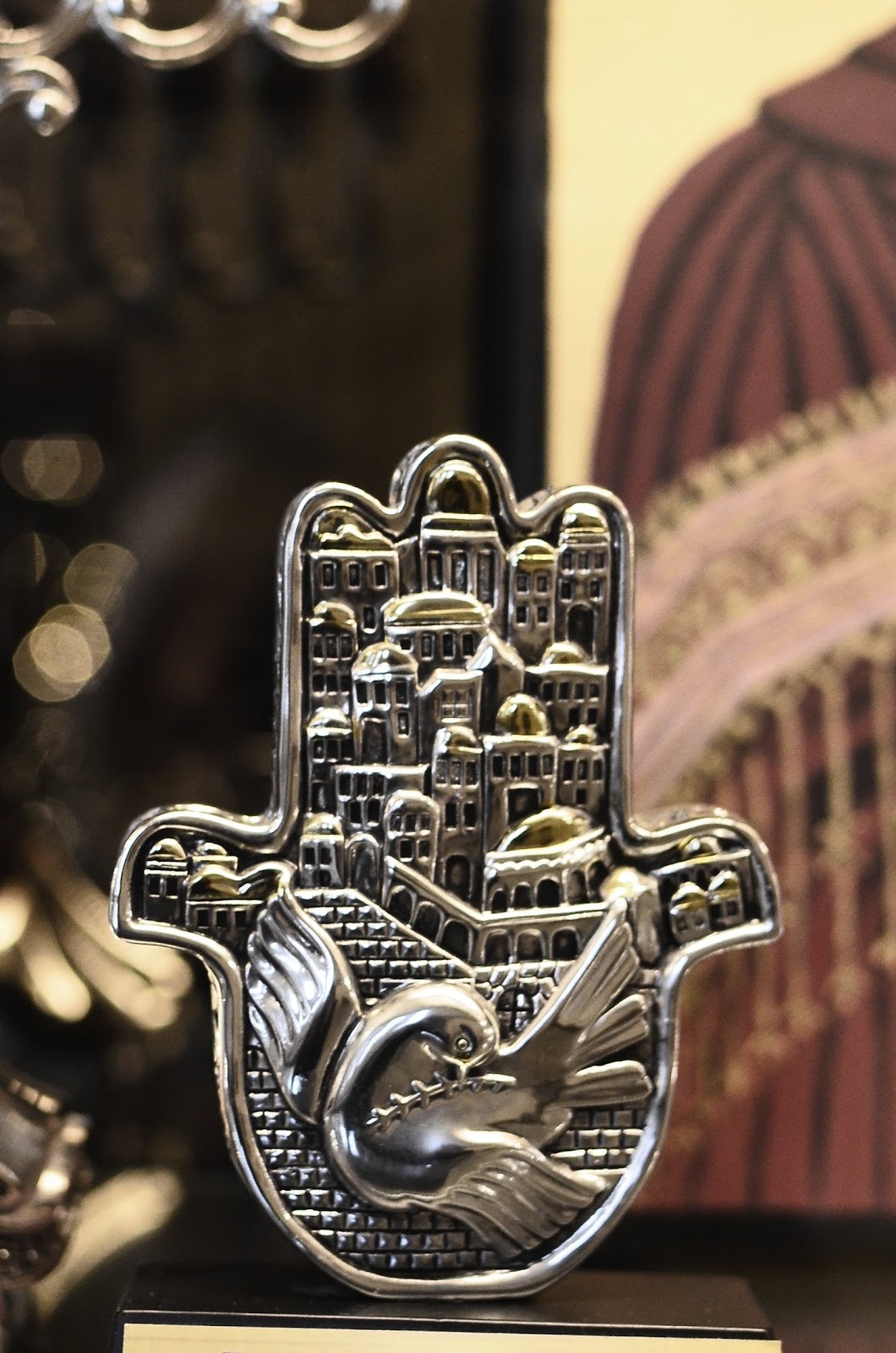 People in the Middle East sometimes whisper “Hamsa” three times, followed by “spitting” three times. This has the same religious meaning as when we touch wood to keep negative thoughts away.

This symbol is an upright hand with three fingers joined in the middle and two thumbs facing in different directions. One of its most prominent aspects is a big eye on the palm, which is an essential part of the Hand of Fatima or Hamsa hand.

It also features numerous patterns coming up from the sign and into the fingers pointing up or down, and it’s believed that the eye on the palm serves to ward off the evil eye.

Hamsa hand originated thousands of years ago and is an ancient sign which represents God’s hand in the Middle East. It is a protective charm in all faiths and welcomes prosperity and wealth upon its owner.

Since this symbol has been around before any major religions. It became a universal sign of safety in so many cultures.

The people believe that it can bring good luck to its owner.

In ancient Mesopotamia and Carthage, today known as the Middle East and modern-day Tunisia was the hamsa hand sign was first discovered.

Hamsa then made its way into the Islamic faith via the story of Fatima and her husband’s betrayal. After that, it began to serve as a symbol to protect women, and it moved from Islam to Judaism as a result.

The symbol is related with protecting the owner from all kinds of evil, or from the evil eye in modern days.

RELATED: The Most Dependable Crystals For Protection From Danger You Must Have

What does the Hamsa hand symbolize?

For thousands of years now, the Hamsa has been very present in drawings, on walls, tattoos, jewelry, and various other items.

The natives of Mesopotamia adopted the five-finger sign because they had a phrase that said, “Here’s five fingers in your eye.” Hence why the Hamsa hand usually has an eye in the middle and why it became a symbol of protection.

Over the ages, some of its meaning and features have changed. But, its still known to be a symbol of protection across all religions.

People believe it brings all-around good fortune to its wearer. However, there is a difference in the way one wears it.

Should you place your Hand of Fatima Up or Down?

It’s helpful to know the symbol doesn’t have the same meaning depending on the way the hand faces and how you wear the it.

When you position your Hamsa hand upwards it will bring you protection. It acts as a guarding charm, keeping all evil and negativity away whether it comes from within or the outside world.

Wearing the symbol up with the fingers close together amplifies its protective powers.

Wealth, happiness, and welcomes all good things coming your way, is what Hamsa hand in downwards position represents.

Hamsa or Khamsa – When translated from the Arabic “Jamsa”, it means five

Hand of Myriam or Miriam – Named after Miriam, the sister of Moses of the Jewish religion

Hand of Mary – Named after Mother Mary, the mother of Jesus Christ

Hand of Fatma or Fatima – Named after Fatima, the Islamic prophet Mohammed’s daughter

Hamesh – which means five (the number) in the Hebrew alphabet

Known as “the hand of Fatima” by both Shia and Sunni Muslims. The daughter of prophet Mohammed, Fatima al Zahra is a member of the Cloak’s people. For protection and good fortune, calling upon her often is part of Muslim culture.

The five pillars of Islam is what Hamsa also symbolizes, which are the faith, charity, prayer, fasting, and pilgrimage.

Hamsa is “hamesh” in Judaism, which means five with similarity to the Torah’s five holy books. These are: Genesis, Exodus, Leviticus, Deuteronomy, and Numbers.

This number not only reflects the Torah’s five holy texts but also serves as a reminder to its bearer to honor God with all five senses.

In Jewish culture, the symbol also represents the Hebrew alphabet’s fifth letter, “Heh,” which signifies one of God’s holy names. Another name for the hand of Hamsa in Jewish culture is the hand of Miriam, after the sister of Moses.

The five fingers in Buddhism have five senses which run through the body and mind interconnects with the five fingers of Hamsa hand. The meaning of the Hamsa is the same in Hinduism.

This energy passes between the centers with the help of various hand gestures. Meditating or doing yoga channels this energy. Vibration in each finger, and the Hamsa hand is connected with the five mudras:

–   The index finger with the heart chakra and air element

–   The middle finger with the throat chakra and ethereal element

–   The ring finger with the root chakra and the earth element

–   The pinkie finger with the sacral chakra and the water element

RELATED: What Are The 7 Chakras? Amazing Metaphysics And Healing Properties

Some Christians interpret the meaning of the Hamsa by viewing it as a depiction of the hand of Mother Mary. Compassion, strength, and femininity are her attribuutes.

It also reflects Mary’s elevation above everything else and her role as a loving mother to all.

Eye symbol is sometimes replaced with a fish in the middle of Hamsa hand. In Christianity, the fish symbol represents protection against all who wish you harm.

Some Christians are against in wearing the Hamsa, because other religions adopted the meaning in their beliefs. Instead, they wear and use a cross for protection.

Hamsa hand jewelry is popularly worln all over the world to ward off evil and bad luck.

Created from a wide range of materials accounting from wood to sterling silver, and everything in between, produces this jewelry. Pendants on necklaces is the common way of wearing it.

The hand of Miriam, whether worn up or down, protects and keeps the evil eye away.

It is worn as a necklace, bracelets, and or rings for the good luck charm to be visible. To remind oneself and others of the protection the symbol holds against the evil eye.

Associating your Hamsa with other lucky symbols or even crystals magnifies chances of attracting good fortune and abundance, rather than for protection against the evil eye.

Should you wear the Hamsa?

It’s important to remember that the symbol means far more than just an accessory. One should remember to honor it’s history and cultures that use it as a spiritual symbol.

You are more than welcome to wear the Hamsa hand, if you are comfortable with the rich history it carries.

Prosperity and abundance is the universally recognized sign of Hamsa or the Hand of Miriam. Wearing it keeps away the evil eye and helps ward off the evil that may come your way in general.

RELATED: The Must-Have Crystals For Abundance – A Guide On 20 Amazing Crystals

Gloria White
Hi, my name is Gloria White, and I’ve always been interested in spirituality, and how crystals, numerology, and symbols can have a direct impact on our lives.

It’s a big passion of mine, and one I have always wanted to share with others, to provide them with a better understanding of the topic.

A lot of people are unsure of the significance of chakras, and crystals, and how influential they can be in our lives. Even dreams and numbers we assume are irrelevant often have a deeper meaning, and are significant.

I hope to provide readers with a better understanding of spirituality as a whole. From the significance of animals appearing in dreams to the seven major chakras, I will be covering everything you need to know.